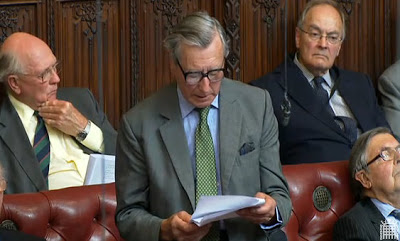 The final comments are being made at the House of Lords in advance of the vote on marriage, which could come around 2PM Eastern.  Watch live here. The Lord speaking at this writing (above) just announced that he will vote for the “wrecking amendment” to stop the bill from coming to a vote.

UPDATE: JMG reader Mike directs us to the Guardian‘s live blog of the proceedings.

UPDATE II: With a pro-gay shout of “Not Content” about the “wrecking amendment,” the Lords are now about to vote on it. Watch live here.  Watchers on Twitter are encouraged.

UPDATE III: The “wrecking amendment” to stop marriage bill in its tracks has been DEFEATED by a vote of 390-148!!! Hail Britannia!  It should be noted that some Lords are said to have opposed the amendment only to maintain the principle that all bills deserve an actual vote.