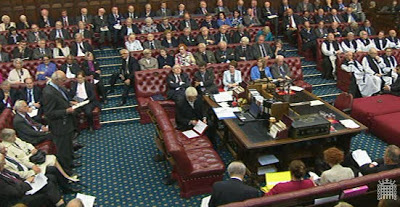 The debate has begun. Watch it here.  The Lord speaking at this writing is denouncing the  “redefinition of an ancient institution to benefit a miniscule minority.” He added, “Marriage between a man and a woman predates nations and predates laws.” And gay marriage in Spain is causing the demise of opposite marriage. And something about school children “being forced to act out gay weddings in class.”  Blah, blah, blah.

Previous Headline Of The Day
Next TODAY: SiriusXM At 2:30PM