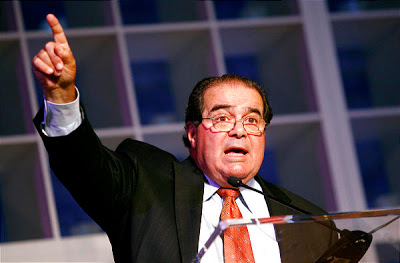 Speaking before a group of North Carolina lawyers, Supreme Court Justice Antonin Scalia yesterday restated his opinion that “moral issues” like homosexuality and same-sex marriage should be left up to a public vote.

In a speech titled “Mullahs of the West: Judges as Moral Arbiters,” the outspoken and conservative jurist told the N.C. Bar Association that constitutional law is threatened by a growing belief in the “judge moralist.” In that role, judges are bestowed with special expertise to determine right and wrong in such matters as abortion, doctor-assisted suicide, the death penalty and same-sex marriage. Scalia said that approach presents two problems: Judges are not moral experts, and many of the moral issues now coming before the courts have no “scientifically demonstrable right answer.” As such, he said, it’s a community’s job to decide what it finds morally acceptable, not the courts’.

While justices are not permitted to comment on pending cases, the Charlotte Observer notes that Scalia “frequently listed homosexuality” among the issues that should not be ruled upon by judges. (Tipped by JMG reader Jim)