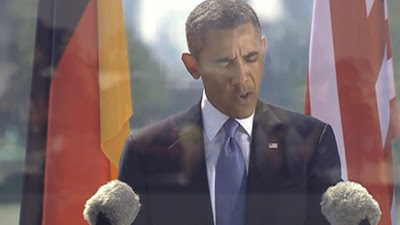 “When we stand up for our gay and lesbian brothers and sisters and treat their love and their rights equally under the law, we defend our own liberty as well. We are more free when all people can pursue their own happiness. And as long as walls exist in our hearts to separate us from those who don’t look like us, or think like us, or worship as we do, then we’re going to have to work harder, together, to bring those walls of division down.” – President Obama, speaking at Berlin’s Brandenburg Gate today during the G8 Summit.

Obama spoke at length about freedom, both in Europe and in the Middle East, as well as the need for opportunities for all, regardless of gender or race, and to shore up world economies to provide those opportunities. He received the most enthusiastic applause when he spoke about his plan to reduce nuclear warheads deployed by the U.S. and Russia by one-third, and reiterated his determination to close the terrorist prison at Guantanamo Bay, Cuba. He also called for further efforts to replace fossil fuels with other forms of energy to address changes in climate, a big issue in Germany that he described as “the global threat of our time.” Prior to the speech Berliners said they are less excited about this visit and have been disappointed that Obama has not delivered on promises he made previously.