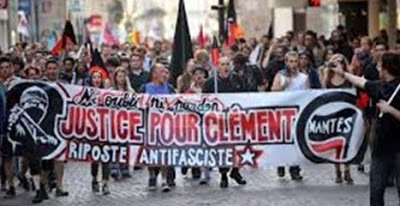 Memorial vigils and rallies were held across France last night for murdered 19 year-old pro-gay activist Clement Vigil, who died yesterday after being attacked by neo-Nazis outside a Paris clothing shop. Many have blamed France’s anti-gay marriage movement for spurring the attack, an allegation hotly denied by former Manif Pour Tous leader Fridige Barjot, who has vowed to sue a prominent marriage activist for making that claim.

Multiple arrests have been made in the killing.

French Interior Minister Manuel Valls announced earlier on Thursday that seven arrests had been made, including that of the individual suspected of delivering the final blow to Méric. French President François Hollande, speaking on an official visit to Japan, said he “condemned the attack in the strongest possible terms.” “I have given the most rigorous possible instructions so that the authors of the odious act can be arrested at the earliest possible juncture,” he said in a statement.

The Parti de Gauche (Left Party) reflected the mood of many, especially on the Left, in France. “The horror of fascism has just killed right in the middle of Paris,” they said in a statement. “Violently beaten to the ground by a group of activists from the extreme right, manifestly from the group JNR (Jeune Nationaliste Revolutionnaire),” the statement added. For his part, the leader of JNR, Serge Ayoub, also known as ‘Batskin’, has denied his group’s involvement in the attack. “That’s absolutely false,” he said.

Among the groups memorializing Meric last night was the anti-fascist organization to which he had belonged.