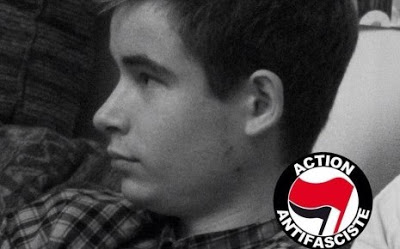 France has been rocked by a vicious attack by neo-Nazi skinheads which has left a well-known leftist student activist brain-dead.  Former Manif Pour Tous leader Frigide Barjot has vowed to sue a prominent gay marriage activist for implicating her movement in the attack. Via The Local:

French Interior Minister Manuel Valls announced on Thursday that four arrests had been made, including that of the individual suspected of delivering the final blow to Clément Méric in an attack on Wednesday evening. Méric, an 18-year-old student at Sciences Po in Paris, was “violently attacked” by a group of three skinheads, including one woman, near Saint-Lazare train station on Wednesday evening, it emerged on Thursday.

Méric, known for his radical left-wing activism, was left brain dead by the beating, which has provoked a flood of horrified and angry reactions from many different quarters in France. French President François Hollande, speaking on an official visit to Japan, said he “condemned the attack in the strongest possible terms.” “I have given the most rigorous possible instructions so that the authors of the odious act can be arrested at the earliest possible juncture,” he said in a statement.

The skinheads, who reportedly wore brass knuckles, are said to be members of the extreme-right Young Nationalist Revolutionaries. Accusations and denials are flying on all sides.

Marine Le Pen, leader of the far-right National Front, made sure to distance her party from the violence. She called the attack on the young student repulsive and detestable but said far-right groups such as the JNR had no ties with her party. Le Pen reacted angrily when it was put to her that one of the three aggressors was seen wearing a t-shirt with her party’s logo.

“Making this kind of association is scandalous, I’d like very much to know who this witness is,” Le Pen told RTL radio. “You have no proof at all.” French industrialist and pro-gay marriage activist Pierre Bergé has caused a stir by implicating the anti-gay marriage movement, known as ‘Manif Pour Tous’ (Demo for all) in the attack on Méric. “Despite everyone who’s insulting me, I say again: the Manif pour tous accepted into their ranks these fascists who killed Clément. For them to reflect on.”

The International Business Times has more:

Interior Minister Manuel Valls said a dispute between left-wingers and skinheads erupted at a clothes sale in Paris 9th district. Meric and three of his friends were attending a Fred Perry private sale in the central Rue de Caumartin when a group of four neo-Nazis, including a woman, arrived at the premises. Eyewitnesses told Le Monde the four sported shaved heads and swastika tattoos; one wore a sweatshirt of British neo-Nazi group Blood and Honour.

Meric, a member of campaigning group Action Anti-fasciste, and his friends reportedly started mocking the skinheads’ over their outfit and the subsequent verbal dispute eventually became violent as the two groups moved outside in the street. Meric was reportedly punched with a knuckle-duster and hit his head on the pavement.

RELATED: Below is a photo of the Young Nationalist Revolutionaries attending last month’s Manif Pour Tour rally in the streets of Paris.