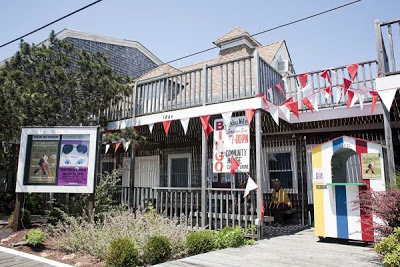 Fire Island’s Cherry Grove Community House will be placed on the New York and national registries of historic places in recognition of its role in creating “America’s first gay and lesbian town.” Sen. Kirsten Gillibrand applauds via press release:

U.S. Senator Kirsten Gillibrand (D-NY) announced today that the U.S. Department of the Interior’s National Park Service placed Cherry Grove Community House and Theater on the National Register of Historic Places. Last month, Senator Gillibrand urged the Chief of the National Register of Historic Places and National Historic Landmarks Program to designate the Fire Island site on the official list of the country’s historic places worthy of preservation. Located on Fire Island, this historic site provided one of the first settings for collective gay identity to openly appear in our nation’s history. “This is great news. The Cherry Grove Community House and Theater represents the first civic entity to integrate gay and lesbian interests into governance and social life,” said Senator Gillibrand. “I am thrilled that this historic site, the first civil rights organization for the LGBT community, is finally acknowledged for their contributions.”

Newsday notes that the structure was built in 1945 across the bay in Sayville and floated on a barge to Fire Island. More from their story:

In the conservative climate of the mid-1940s, the community provided a rare sanctuary, where “the integration and self-affirming presentation of homosexual men and lesbians in Cherry Grove’s social life” gave it “exceptional historic significance,” according to the application. The community house was built in Sayville because construction resources were tough to come by on Fire Island after World War II, Yaeger said. The theater was added in 1948, and Yaeger believes it’s one of the oldest “continuously used gay theaters in the United States, and probably in the world.”