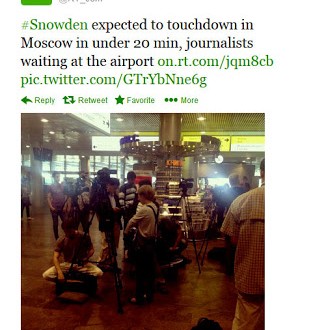 Wikileaks founder Julian Assange has helped NSA leaker Edward Snowden get out of Hong Kong.  But he apparently won’t be in Moscow for very long:

Edward Snowden left for Moscow on Sunday and his final destination may be Cuba, Ecuador, Iceland or Venezuela, according to various reports. The move is bound to infuriate Washington, wherever he ends up. “It’s a shocker,” said Simon Young, a law professor with Hong Kong University. “I thought he was going to stay and fight it out. The U.S. government will be irate.” Russia’s Interfax news agency quoted a source at the Aeroflot airline as saying there was a ticket in Snowden’s name for a Moscow-Cuba flight. Itar-Tass news agency cited a source as saying Snowden would fly from Havana to Caracas, the Venezuelan capital. The South China Morning Post said his final destination might be Ecuador or Iceland.

On Friday night the federal government formally charged Snowden with espionage. Should he ever come to trial, he faces up to thirty years in prison.

Previous Blondie – A Rose By Any Name
Next Decision Day Update