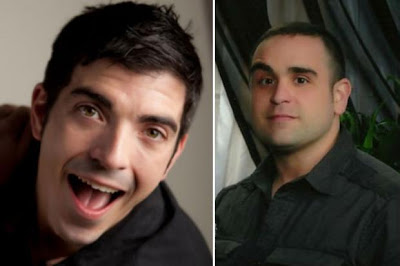 Nutcase homocon blogger Kevin DuJan (above right) may be facing a lawsuit from a Chicago teacher whom DuJan claims makes racist jokes about his students during his moonlighting gig as a stand-up comedian.

Kevin DuJan, the same blogger who speculated that President Barack Obama was a gay man with a cocaine habit, posted a story on his HillBuzz blog on May 28 titled, “Public School Shocker: Gay Porn Actor and Male Stripper Employed As Teacher at Joseph Stockton Elementary School in Chicago!” The post accused 34-year-old Bradley Balof, a middle school teacher at Stockton with a “superior” rating from CPS, of starring in pornographic films and making racist jokes about his black students. CPS said it was investigating the teacher — who denied DuJan’s accusations and was contemplating legal action. “The allegations made about me in Kevin DuJan’s blog, are false,” Balof told DNAinfo Chicago Monday. “I am presently seeking legal options against Mr. DuJan.”

DNA Info notes that the two indie films that feature Balof were not, in fact, “gay porn” movies.  DuJan’s claims about Balof are part of his long-running smear campaign against the owners of the popular Boystown bar Sidetrack, where Balof performs and where DuJan famously claims to have had his drinks poisoned by anti-Christian leftist gays who are also cockblocking his attempts to hook up with hot twinks. DuJan’s current boyfriend, a former Sidetrack doorman, is suing the club for allegedly firing him for being a Christian.  Last month DuJan claimed that Sidetrack’s owners perjured themselves during an unemployment hearing for his boyfriend in which DuJan was called as a witness.

RELATED: In his Father’s Day post on Sunday, DuJan asserted that the gay community is “really determined to alienate young gay guys from their families.”  Dujan: “This is because ‘gay activists’ enjoy telling young gay guys fresh on
the bar scene that their parents were monsters for not accepting them
for who they are or immediately joining PFLAG.”

UPDATE: In a post made minutes ago, DuJan is now claiming that employees of Sidetrack have been ordered to slit his throat if they see him. He adds: “I do not set foot inside Sidetrack itself because I believe I actually
might indeed be killed if I did…but I need to be out and about in the
bars of Boystown because that’s where I get all the intel for my
reporting.”