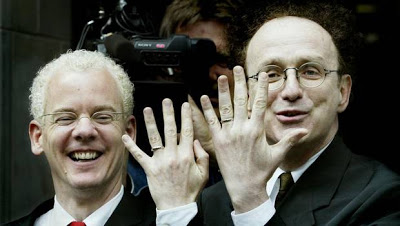 Ten years ago today the Ontario Court of Appeal ruled that Canadian law on marriage violated the equality provisions in the Canadian Charter of Rights and Freedoms in being restricted to heterosexual couples. Via the Globe And Mail:

A decade later, Michael Leshner and Michael Stark — Canada’s first legally married same-sex couple — believe the battle to have their union recognized by the courts has made it easier for today’s lesbian, gay, bisexual and transgender Canadians to feel accepted. “We were, I think, the last major group that in the public imagination was very discriminated against,” said Leshner. “Once you have marriage you have full equality. That was won that day.” Nicknamed “the Michaels,” the pair’s quick civil ceremony in Toronto came just hours after Ontario’s Court of Appeal pronounced the Canadian law on traditional marriage unconstitutional on June 10, 2003. While Ontario was the first to legally recognize same-sex marriage, many other provinces followed soon after. Two years later, the federal government legalized same-sex marriage countrywide with the gender-neutral Civil Marriage Act.

The Toronto Star has published an op-ed written by another gay man married that day.

The ceremony took a few minutes. Ever the gentleman, I let my groom sign the register first. And with the stroke of a pen, he became my husband, so-named on our marriage certificate. The clerk was embarrassed and apologetic as she wrote my name on the remaining line, the one for the wife. It was almost funny. And it was no big deal.  Outside, the wedding procession was not as joyful. Protesters, including busloads of Americans, were waiting to chant slogans at us. Clutching Bibles and flags, these paragons of morality linked my marriage with shame and sin. There were children with them, chanting along. None of it bore any resemblance to the applause and confetti that usually greets newlyweds.  I left under a hail of insults, shaken but standing tall. Sad, but overflowing with joy. I had one thing on my mind — the man of my dreams, whom I’d just married.