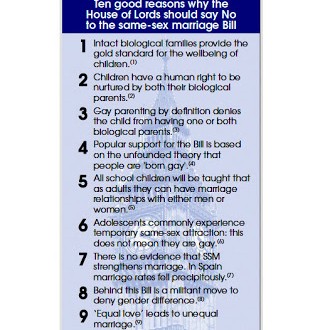 A new anti-equal marriage group called ‘Gay Marriage No Thanks’, which has former Christian Peoples Alliance leader Alan Craig as its spokesman, has taken out an advert in The Times – a newspaper which editorially supports marriage equality. The ‘Gay Marriage No Thanks’ group brings together legal, educational, medical and sociological individuals in their joint-opposition of marriage rights for same-sex couples. Craig said: “Talk of the rights of adults has dominated debate about the issue, whether those are homosexual rights or religious rights. But what about the rights of children? And what does the evidence say about the impact of these plans?

The first footnote in the ad cites the widely discredited Regnerus study.  The group has created a website to support their “No Thanks” campaign.