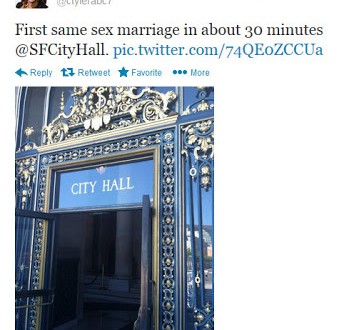 The U.S. 9th Circuit Court of Appeals on Friday cleared the way for gay marriages to resume in California. The court lifted its stay on an injunction which ordered state officials to stop enforcing Proposition 8. With the court’s action, counties can now begin issuing same-sex marriage licenses.

A spokesman for the U.S. 9th Circuit Court of Appeals had originally said it would takes the court at least 25 days to act after a Supreme Court ruling. Immediately afterward, Gov. Jerry Brown ordered his public health agency to advise the state’s counties to “begin issuing marriage licenses to same-sex couples in California as soon as the 9th Circuit confirms the stay is lifted.”

UPDATE: Cleve Jones and Dustin Lance Black are at City Hall with Prop 8 plaintiffs Kris Perry and Sandy Stier, who are getting their license right now.

UPDATE III: And they are MARRIED.

UPDATE VI: Contrary to a couple of SF media feeds, the above photo of Kris and Sandy is of them attesting to their marriage license. Here’s the wedding! “I now pronounce you spouses for life.”