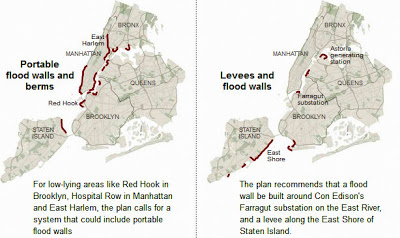 New York City Mayor Michael Bloomberg has unveiled a massive $20B plan to protect the city from again suffering the devastating flooding wrought by Hurricane Sandy. The plan calls for an extensive network of barriers, levees, and bulkheads along parts of the city’s 520 miles of waterfront. That $20B figure is just a jumping off point and is approximately equal to the damage estimates from the storm.

In the first phase of building defenses, the report released on Tuesday calls for erecting barriers at Hunts Point in the Bronx to protect the food distribution center, on the East Harlem waterfront along Franklin D. Roosevelt Drive, on the East Side where several of the city’s hospitals are, on the Lower East Side, in Chinatown, in the financial district and in Red Hook, Brooklyn. On Staten Island, the plan calls for a system of permanent levees. Along some parts of the coast, stone or concrete bulkheads would be installed, while in other places, dune systems would be built. The city’s power infrastructure also should be better protected, the report said. Currently, 53 percent of power plants are in threatened neighborhoods. By the 2050s, according to the report, 97 percent will be.

Aside from the damage to city and state owned infrastructure, the storm cost private businesses billions more. Among the hardest hit were downtown business and residential towers, most of which had key electrical and mechanical systems in their basements. Some of those buildings went up shortly after the Bloomberg administration invested hundreds of millions to develop parks and other public areas on the shorelines of lower Manhattan and Brooklyn.