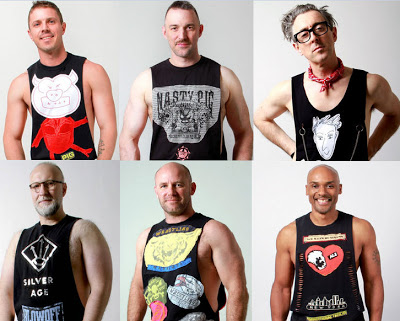 A galaxy of stars have come together to support the Ali Forney Center’s Shred Of Hope, an online auction in which you can bid on original t-shirts created by gay celebrities and straight allies. Each of the participants worked with designers at the Manhattan-based fetish wear company Nasty Pig to create one-of-a-kind “shredders,” which are sort of not-tank-tops.

Shred of Hope is an auction of one-of-a-kind “Shredder” t-shirts created by celebrities. The auction will take place entirely online from June 20th through June 27th at ShredofHope.com. 100% of the proceeds of Shred of Hope will support AFC’s work to protect and empower homeless LGBT youth, and to help them in becoming safe and independent as they move from adolescence to adulthood.

On June 20th Nasty Pig and the Ali Forney Center will host a launch party for Shred of Hope at the iconic Rootstein Gallery in New York City. Nasty Pig models will walk the floor selling opportunities to win one-of-a-kind Shred of Hope items and experiences to benefit the AFC.

NOTE: Somehow yours truly was also invited to participate. While I’m not a rock star or an Oscar winner, I’m going to depend on my faithful flying monkeys to make sure that MY shirt auctions well. The JMG logo is on the back and everybody signed their shirts. The auction starts online on June 20th.

Previous ISRAEL: Police Say 2009 LGBT Center Shooting Was Revenge For Sexual Assault
Next Pope: There ARE Gays In The Vatican