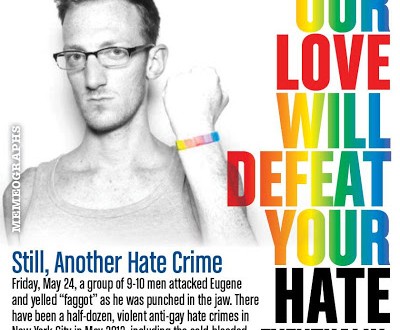 Yet Another Gay Bashing in Manhattan

NY1 has the details:

A Manhattan teenager is facing hate crime charges after he allegedly assaulted a co-founder of a local gay rights group in Hell’s Kitchen yesterday. Manuel Riquelme, 19, is charged with hate crime and aggravated harassment after allegedly hitting Eugene Lovendusky, 28, a Queens resident and co-founder of Queer Rising, an LGBT rights and advocacy group.

Police say the alleged assault took place at 3 a.m. Saturday on West 42nd Street between Eighth and Ninth Avenues. At the time, authorities say Lovendusky and his boyfriend and another friend were leaving the XL nightclub and walking towards a nearby subway stop. Police say a group of nine teenagers, including Riquelme, passed the group of three men and started calling them anti-gay slurs.

Riquelme allegedly slapped Lovendusky in the face and knocked off the victim’s glasses, according to police. After the alleged incident, Lovendusky called police and officers found the teens in a pizzeria at West 40th Street and Ninth Avenue. Lovendusky did not seek medical attention. The incident is being investigated as a bias assault, according to police.

Lovendusky has appeared twice on JMG in the last two weeks as he was the co-organizer of the hate crimes rally at Madison Square Garden and he spoke at the vigil for murder victim Mark Carson.

NOTE: The attack on Lovendusky took place on Friday night, but I held my report until it was confirmed this afternoon by the media and the NYPD.