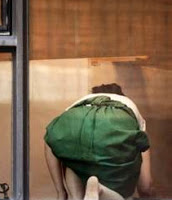 Residents of a luxury Tribeca building are angry about an art gallery’s exhibition of photos taken from an apartment across the street.

From his second-floor apartment across the street, artist Arne Svenson secretly took photos of his neighbors through their oversized windows as they engaged in such personal things as bending over cleaning, taking naps and carrying sleeping kids to bed. The shots — which don’t show full faces — are now being sold for up to $7,500 each at the Julie Saul Gallery in an exhibition called “The Neighbors,” which opened Saturday. Residents of the Greenwich Street building — where penthouses fetch up to $6 million — soon caught wind of their involuntary modeling, and are fuming. “This is about kids. If he’s waiting there for hours with his camera, who knows what kind of footage he has. I can recognize items from my daughter’s bedroom,” said one resident who appears in a Svenson photograph.

The photographer says: “For my subjects, there is no question of privacy. They are performing behind a transparent scrim on a stage of their own creation with the curtain raised high.”

Previous What Vine Is For
Next TODAY: International Day Against Homophobia And Transphobia