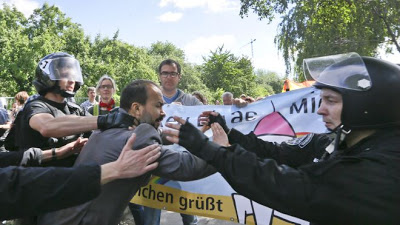 Ukraine saw its first-ever gay pride event today in Kiev, where activists were prepared for the sort of violence seen last week in Georgia.  As you’ll see in the short clip below, there were a few frightening scuffles, but the small event concluded without injuries. Pink News reports:

Despite a ban by a local court, more than a hundred LGBT rights activists held the first gay pride demonstration in the capital of Kiev. The event was relatively peaceful despite the attempts by a very small number of individuals to disrupt the occasion. “This can be considered a historic day,” Elena Semyonova one of the organisers told reporters after the activists held a 20-minute-long march along a street near the centre of the Ukrainian capital. Witnesses noticed the sober dress of activists who were advised to wear comfortable clothes and shoes that would make their escape easier in the event of an attack by anti-gay protestors or the police.

We applaud our brave counterparts in Ukraine.