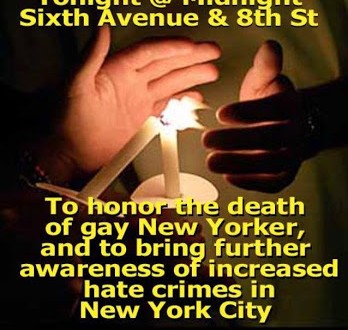 In response to last night’s hate crime murder of a gay man, tonight there will be a candlelight vigil at midnight at the scene of the crime in the West Village.  Gather at the corner of Sixth Avenue and Eight Street near the Gray’s Papaya restaurant.  The location is one block from the Ninth Street PATH station and two blocks from the Christopher Street 1 train station.

UPDATE: The New York Times has released the victim’s name.

Mark Carson did not hide that he was gay, and when he went out on the town he would often head to Greenwich Village, where years before he was born, much of the struggle for gay liberation unfolded. Yet late Friday night, just blocks from the Stonewall Inn, among the most important landmarks of that struggle, he was confronted with a man screaming antigay slurs, who then stalked him before pulling out a silver revolver and fatally shooting him, the police said. Mr. Carson, who was 32, had recently moved from Harlem to Brooklyn after scrimping and saving money from his job at a yogurt shop in Midtown, according to Kay Allen, a friend for more than a decade. “He was a proud gay man,” Ms. Allen said. “A fabulous gay man.” She noted that he loved going to the Village. “His spirit was too big for this city,” she said. “He didn’t have a negative bone in his body.”

Much more about the crime is at the link.

From the Daily News story:

Sources said Carson and his 31-year-old friend were dressed in tank tops and cut-off shorts with boots. “Look at these faggots,” one of the suspect’s crew barked at the pair. “What are you, gay wrestlers?” The two groups exchanged words, but Carson and his pal decided it was better to walk away. But as they turned the corner, the suspect and one of his cohorts confronted the pair again and taunted them by shouting “faggot” and “queer,” Police Commissioner Raymond Kelly said. One of the bigots got nervous and ran away as the suspect asked the two gay men, “Do you want to die here?” Kelly said. Suddenly, the suspect whipped out a silver .38-caliber revolver and shot Carson in the face. The shooter ran away as Carson collapsed on the sidewalk.

UPDATE III: CNN has named the man in custody. He reportedly confessed to the NYPD early this morning.

Around 4 a.m., a police officer, responding to a radio alert of the shooting, came across the alleged gunman and apprehended him. The suspect turned over a silver Taurus .38-caliber six-shot revolver, according to police. Police later identified the suspect as Elliot Morales, 33. Police said the suspect had forged identification and they used facial recognition technology to determine his true identity. Morales faces a charge of second-degree murder as a hate crime, authorities said. The identities of the suspect’s two companions — at least one of whom Kelly said left the suspect before the shooting — are still not known.