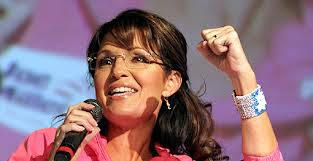 A Tea Party group has launched a “Draft Palin For US Senate” campaign.  And they want her to run in Alaska.

Could Sarah Palin make a political comeback in 2014? That is the goal of the Tea Party Leadership Fund, which is trying to draft the former vice-presidential candidate to run against Senator Mark Begich (D-AK) in his 2014 re-election campaign. The group revealed its plan in an email sent to supporters this week. “You and I both know that Sarah Palin is a fighter who will stand up to Harry Reid and his pals in the Senate to protect our Constitution in issues like amnesty, gun control and our nation’s crushing debt,” the email reads, as reported by the Los Angeles Times. “We know that, with Sarah in the Senate, conservatives across America can rest a little easier at night knowing that she’s at the watch.”