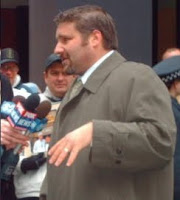 Quote Of The Day – Matt Barber

“Following are excerpts from the ‘DOJ Pride’ decree. When it comes to ‘LGBT pride,’ employees are ordered: ‘DON’T judge or remain silent. Silence will be interpreted as disapproval.’ (Italics mine) That’s a threat. And not even a subtle one.  ‘DO display a symbol in your office (DOJ Pride sticker, copy of this brochure, etc.) indicating that it is a ‘safe space.’ Are you kidding? Does this administration really think it’s legal to compel managers to ‘attend LGBT events,’ or to ‘display pride stickers’ against their will? That’s compulsory expression. That’s viewpoint discrimination. That’s unconstitutional.

“Got it? For Christians and other morals-minded federal employees, it’s no longer enough to just shut up and ‘stay in the closet’ – to live your life in silent recognition of biblical principles (which, by itself, is unlawful constraint). When it comes to mandatory celebration of homosexual and cross-dressing behaviors, ‘silence will be interpreted as disapproval.’

RELATED: Here is the DOJ Pride brochure that Barber claims the Obama administration is “ordering” all DOJ employees to obey. As you’ll see, the brochure is nothing more than a list of standard helpful suggestions to improve office morale. NOWHERE in the message is any threat of punishment or discipline, not that any employee group such as DOJ Pride has that sort of power. But that little fact has gone unnoticed by hundreds of frothing WND commenters.