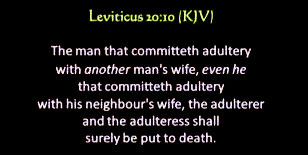 According to the Bible, homosexuality is an abomination worthy of death, but so is heterosexual adultery. Not so in Pat Roberson’s world.  Right Wing Watch provides a recap:

On today’s 700 Club, Robertson told a woman whose husband was cheating on her that she should stop focusing on the adultery and instead ponder, “Does he provide a home for you to live in, does he provide food for you to eat, does he provide clothes for you to wear, is he nice to the children…is he handsome?” After encouraging the woman to focus on the positives rather than her husband’s adultery, which Robertson imagined to be a one night stand with a stripper in a hotel room, he said she should “give him honor instead of trying to worry about it.”

Sanctity of marriage! One man, ONE woman! Forever!