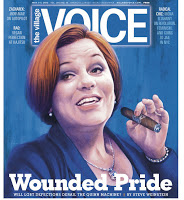 Out Hates Voice Cover On Quinn

“Take a look at that illustration. No, really take a look. What is that fleshy redhead doing holding that puny penis in between her index and thumb? Is she about to put it in her mouth? Take a deep, mouth-filling drag of that cigar-cum-phallus? Chew on the tobacco stick? Or is she about to flick it away, stomp on it, crush that symbol of power, decadence, and privilege? It all depends on how you look at it. But it was the decision of the once-respected free weekly alternative newspaper to portray the New York City Council Speaker and mayoral frontrunner in one of the most sexist illustrations that I have seen on the most (once-perceived) left-leaning periodicals in the country.” – Jerry Portwood, writing for Out Magazine. Later in the piece, Portwood add that he doesn’t see how the Voice isn’t trying to make Quinn look like a “man-hating bull dyke.”