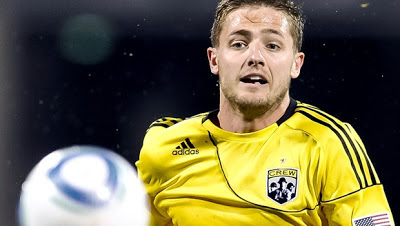 In February pro soccer player Robbie Rogers simultaneously came out and retired from his sport.  But in the wake of the coming out of NBA player Jason Collins, Rogers has reconsidered. This morning USA Today revealed that Rogers has signed with the Los Angeles Galaxy.

He told the world in February that he is gay and at the same moment said he was leaving soccer. Now, Rogers is reversing field and has agreed to terms with the Los Angeles Galaxy, according to two people familiar with the negotiations. Both spoke to USA TODAY Sports on the condition of anonymity because the Galaxy has not announced the deal. Rogers will be the first active openly gay player in Major League Soccer. He also hopes to play for the U.S. national team in the 2014 World Cup — and to be the role model for gay teens that he wished he’d had.

Rogers says his epiphany came after speaking to an LGBT youth group in Portland.

“I seriously felt like a coward,” he tells USA TODAY Sports in an exclusive interview about his return. “These kids are standing up for themselves and changing the world, and I’m 25, I have a platform and a voice to be a role model. How much of a coward was I to not step up to the plate?” And so, newly turned 26, he will step onto the pitch again. He couldn’t imagine such a thing when he told his secret in February, writing an open letter on his website and linking to it with this pithy tweet: “Just getting some sh*t off my chest.”

ESPN covered the news this afternoon.