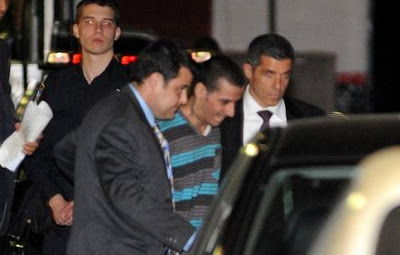 New York City prosecutors reported yesterday that the killer of Mark Carson laughed and boasted about his crime during his arrest.

“Yeah, I shot him in the head,” sneered Elliot Morales, 33, while “laughing on the ground” when cops were handcuffing him for shooting Mark Carson, 32, early Saturday morning. Morales today was held without bail on charges of second-degree murder as a hate crime, menacing and two counts of criminal possession of a weapon, court records show. He is accused of harassing Carson and a pal while they were walking on Sixth Avenue near West Eighth Street around midnight on Saturday. “Look at these faggots,” said Morales, who was accompanied by two friends, according to police.

The New York Times reports that Morales is now claiming to have no memory of the murder.

Mr. Morales’s sister, Edith Gutierrez, said she did not believe he could have committed a bias crime — they have relatives who are gay, she said, and Mr. Morales had shown no signs of homophobia. She also said that when Mr. Morales telephoned her from jail on Sunday, “he said he doesn’t remember anything; he was under the influence, he was drinking.” Mr. Morales, 33, said nothing at his arraignment in Manhattan Criminal Court on Sunday. Judge Robert Stolz ordered him held without bail and scheduled another hearing for Thursday.

Although only 33 years-old, Morales has already spent ten years in prison on a robbery conviction. Police are questioning Morales’ two companions on the night of the murder and say that the men are “cooperating witnesses” and not suspected accomplices.

VERY RELATED: Carson was killed with a Taurus six-shot .38 revolver. On its website, Taurus notes that such guns come with a “free one year NRA membership.” Dealers sell the weapon for $300. New York City detectives report finding a second gun during a search of Morales’ home and described it as a “Serbian-made Zastava assault weapon.”

Wikipedia describes the Zastava M21 assault rifle: “It has a magazine capacity of 30 rounds. The cyclic rate of fire is 680 rounds per minute, and the sustained rate of fire is 120 rounds/min.”

Prior to murdering Mark Carson, Morales made a bizarre claim to a West Village bartender, telling him, “Don’t you know I’m wanted? Do you know about the shooting in Sandy Hook?” The NYPD and the FBI are surely investigating what else Morales may have been planning.