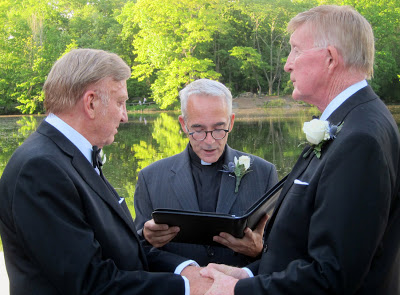 Married After 48 Years Together

This weekend our own Father Tony married Fort Lauderdale residents Mike and Ray, who met 48 years ago at a gay bar in New Jersey.  The ceremony, which took place at Central Park’s Bethesda Fountain, was attended by eight friends of the grooms and was accompanied by a violinist. In lieu of the traditional stipend for officiating, the couple happily agreed to Tony’s usual suggestion of a donation to the Ali Forney Center.  Tony adds: “You should have seen the faces of the three young gay couples who happened by us at the fountain. They remained with us through out the whole ceremony, and you could see in their faces amazing respect for these ‘older’ men who, as Ray said in his vows to Mike, are entering ‘the final phase of our life together.'”