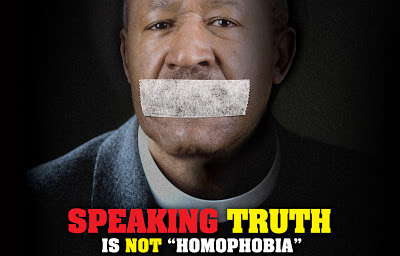 On Monday the Jamaican Coalition for a Healthy Society ran the above full-page ad in the Gleaner, a national newspaper. After ticking off several statistics about HIV, the ad changes to a microscopic font for this disclaimer: “JCHS rejects all acts of violence against all persons.” (They also apparently reject making that statement prominent in their message.) Dr. Wayne West, the group’s chairman, defended the ad in an interview with the paper, which was apparently only too happy to take his money.

“What we have found is that in countries where this political homosexual lobby is advancing, they seek to silence you. You are labelled as homophobic, you are mad, you are not worth listening to, your opinion is of no consequence. But these are fundamental sociological changes and we must have these discussions,” he stated. “Fight evidence with evidence. If you have a problem with what we are saying, then bring the evidence, don’t just dismiss us as mentally ill.” He said the coalition chose to speak out at this time to add to the recent discussions surrounding International Day Against Homophobia and Transphobia, commemorated on May 17.

On the group’s website you’ll find the Kingston Declaration, their own version of the anti-gay Manhattan Declaration.  Some excerpts:

Modes of behavior inherently harmful to the self and to the whole community, premised on false anthropological principles or which use other human beings as means to an end, cannot serve as the basis for rights, even if a State makes a declaration to the contrary. By nature, men and women are sexually complementary and attraction to the opposite sex can be discerned as being in accordance with nature’s design. All human beings, by their nature, possess free will, and are capable of restraining themselves from acting in a sexual or eroticized manner.

Also on their website the JCHS declares their “commitment to being cultural watchmen and bearers of God’s truth and love.” And then they lovingly cite Jamaica’s law against buggery: “Section 76. Whosoever shall be convicted of the abominable crime of buggery, committed either with’ mankind or with any animal, shall be liable to be imprisoned and kept to hard labour for a term not exceeding ten years.”