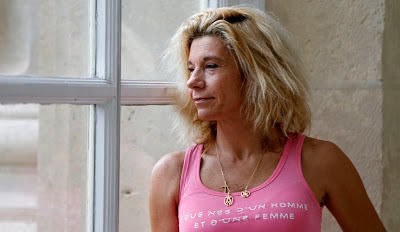 Manif Pour Tous leader Frigide Barjot says she might not attend this Sunday’s planned anti-gay marriage protest because the government has not committed to protecting her from pro-gay counter-protesters and members of France’s extreme-right French Spring.

Barjot: “I get death threats, calls for aggression, and this morning – a handkerchief full of blood. At the moment, and as we do not have strong guarantees on the part of the police and organizers, I put my participation in doubt.”

RELATED: On Tuesday, Dominique Venner, who was reportedly a follower of French Spring, committed suicide at the altar of Notre Dame Cathedral just hours after writing a blog post that denounced the just-finalized marriage equality bill. Venner’s suicide note has now been released in full to the press.  An excerpt:

While many men are slaves of their lives, my gesture embodies an ethic of will. I give myself over to death to awaken slumbering consciences. I rebel against fate. I protest against poisons of the soul and the desires of invasive individuals to destroy the anchors of our identity, including the family, the intimate basis of our multi-millennial civilization. While I defend the identity of all peoples in their homes, I also rebel against the crime of the replacement of our people.

Venner goes on to apologize to his family, but says that one day they will understand his sacrifice.

UPDATE: The Daily Beast has posted a lengthy examination of Venner’s history with France’s fascist movement. A brief excerpt:

A veteran of French ethno-nationalist neo-fascist groups, Venner was a longtime militant of the far right who had gradually eased into a new life as a respected historian, known for his expertise on weapons and hunting. But his suicide manifesto, as well as a blog post he published earlier that morning, took him directly back to the dark themes that drove his life: the “great replacement of the people of France” and the prospect of France “falling into the hands of Islamists.” He praised an upcoming protest of France’s new law legalizing gay marriage, which he called “detestable.”