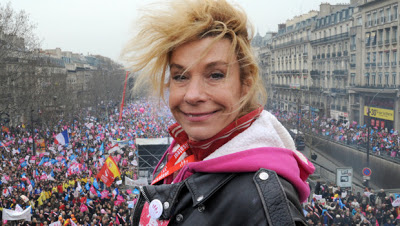 Frigide Barjot says that extremists from the French Spring have seized control of Manif Pour Tous and she is leaving to start a new movement. Via The Local:

After the latest rally ended in violence as a hail of bottles and bricks rained down on France’s police force and journalists were attacked in the street, Frigide Barjot, the comic who has led the ‘Manif pour Tous’ (demo for all) campaign, walked away, along with her right hand man Xavier Bongibault.

Speaking to The Local this week, Bongibault said they would continue to fight against gay marriage but under a new banner “l’Avenir pour Tous” (A future for all), which plans to bring together like-minded people to share their ideas.

Bongibaut admitted he and Barjot had lost control of the Manif pour Tous as radicals from more extreme groups like Printemps Français (French Spring) took the helm. “With the radicalization of the ‘Manif Pour Tous’ movement it became intolerant, we lost control of it,” Bongibault said. “They just want to break everything, but that’s not how you bring about change,” he said.

Bongibault, who is gay himself, said there will be no more mass street protests and ‘L’Avenir pour Tous’ will direct its energy towards putting pressure on France’s elected politicians to overturn the gay marriage bill as well as fighting any move towards surrogacy or medically assisted procreation for gay couples.

Recent polls indicate that the vast majority of the French public is sick of the protests and wants them to stop. Earlier this week both the FRC and NOM praised the increasingly violent and ugly anti-gay protests.