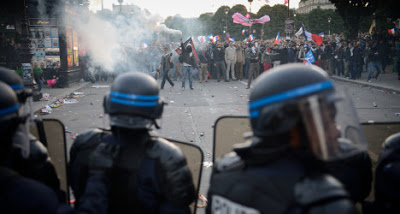 Interior Minister Manuel Valls said on Monday that police had made a total of 350 arrests, and that 36 people had been injured: 34 police officers, one AFP photojournalist and one protester. In a statement, Valls blamed the “extreme right” for the violence. Some of the far-right activists briefly unfurled a banner at the ruling Socialist party’s headquarters urging President Francois Hollande to resign.

As the protesters dispersed, after a largely peaceful march, police said up to 500 people began attacking them by throwing metal barriers, smoke flares and beer bottles. The youths shouted slogans against the government such as “Socialist dictatorship” and also threw objects at journalists covering the event. “These incidents were provoked by several hundred individuals, most from the extreme right and the (nationalist) Bloc Identitaire, who violently attacked police,” he added.

Anti-gay leaders said that the government is attempting to squelch dissent by “smearing” their movement as being dominated by the extreme right.

I think the French police under the leadership of the Ministry of the Interior regard these demonstrations as an ideological threat to their power – and indeed that what’s they are. This is the biggest mass demonstrations probably in the whole of French history, and certainly for the last 30 years or more. And they have been completely unexpected. The government never expected so many people to turn out into the street. And they realize that those people who were demonstrating yesterday, as I say, they are ideological enemies.

And there’s been a lot of propaganda, encouraged again by government, saying that the demonstrators are an extreme-wing gang. This is the government propaganda. This is precisely the way that the government has been seeking to delegitimize what is a massive demonstration and is overwhelmingly peaceful. The fact that a few young people ended up throwing a couple of bottles at the police – not that I approve it – doesn’t mean as the government would like to pretend that somehow dangerous, sinister forces work behind these demonstrations.