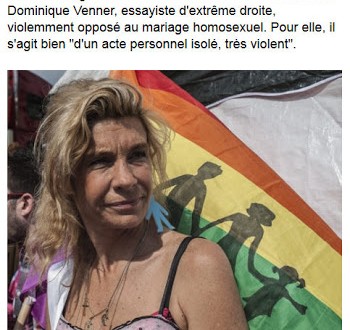 Yesterday a well-known anti-gay marriage activist shot himself in the head at the altar of Notre Dame Cathedral hours after writing a blog post denouncing France’s legalization of same-sex marriage.  The French press, quite naturally, wants to know if the man was affiliated with Manif Pour Tous.

Their leader Frigide Barjot says he was not: “This was a personal, isolated act. This man was part of a movement called the French Spring, which has nothing to do with us and we have condemned a long time ago. I did not know this man who belonged to the extreme-right. I pray for his soul.” Barjot went on to claim that she has received death threats from France’s extreme-right.

The French Spring is an anti-gay campaign by France’s far-right that calls for the overthrow of the ruling Socialist Party. (Perhaps obviously, the name is a take on the Arab Spring.)  Many of the most violent anti-gay riots that France has recently endured are believed to be the work of French Spring followers.

NOTE: The above quote from Barjot was roughly translated via Google. Feel free to make any corrections in tone or content.