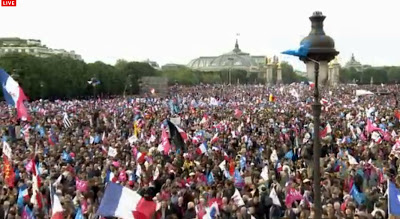 FRANCE: Hundreds Of Thousands March In Paris Against Same-Sex Marriage

Manif Pour Tous is claiming that one million turned out for today’s anti-gay march and rally against same-sex marriage. Paris police are putting the number at 200,000. Watch live here.

UPDATE: Riot police are already on the scene and responding to protesters who have handcuffed themselves to barricades.