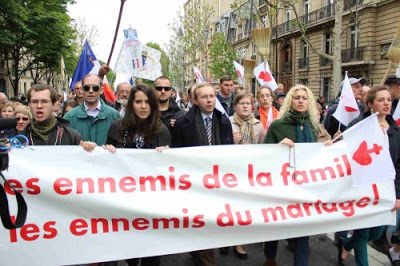 Joining today’s anti-gay march in Paris was the Civitas Institute, a group that demands a Catholic theocracy for France.   According to Civitas, President Francois Hollande is a “puppet of the Freemasons.” They were followed by members of the extreme-right Nationalist Youth (above), a division of the National Front party, whose leader Marine Le Pen praised the Notre Dame suicide of Dominique Venner.

UPDATE: Civitas claims that 10,000 of its followers attended today’s march. Via Google Translate:

Catholics and French patriots wanted to show their commitment to marriage, the family, and the values ​​that are the soul of our country and that the greatness of our civilization. This marriage law is so clearly opposed to basic common sense and the common good of society, it becomes illegitimate and there is no way we will respect or obey it. This May 26 will mark the transformation of the French Spring into a revolution. Remain focused! The slogan remains the same: Destroy the enemies of marriage, family and France.