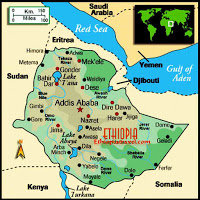 An Ethiopian anti-gay religious group claims to be “making progress” in their campaign to convince the government to institute a death penalty for homosexuality.  The news comes from a workshop just held by the group.

Government officials, religious leaders, leading heath professionals, charities and members of the public attended the event at the Bethel Teaching Hospital in Addis Ababa, last week. In the workshop police alleged ‘homosexual family members and neighbors’ have sexually abused 117 boys last year. Participants agreed that the Western gay motto ‘born this way’ is unacceptable to Ethiopia, stating that not only has homosexuality nothing to do with nature, but the ‘condition’ runs against it.  A representative, from the Ethiopian Inter-Religious Council Against Homosexuality (EICAH) organization, underlined to workshop participants that gayness is not natural and has nothing to do with human rights, but ‘a result of a result of inappropriate upbringing, identity crisis and moral decay. At the conclusion of the workshop, the EICAH representative stated that the council is ‘making progress’ in convincing the government to be stricter on homosexuality and introduce the death penalty to punish ‘such acts’.