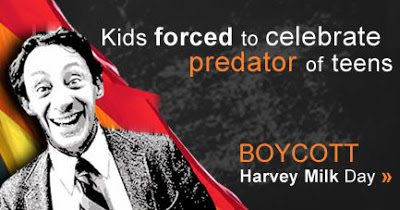 Save California has launched a radio and web campaign urging parents to keep their kids out of school during Harvey Milk Day observations.  In 2009 then-Gov. Arnold Schwarzenegger signed the bill designating May 22nd as a “special day of recognition” in California.  Save California has called for keeping kids out of school every year since then, but this year’s marks their first radio campaign on the issue. Listen to the spot here.  The group has also produced flyers for parents to hand out. Note how they’ve inserted the word “gay” into the title of the day in the excerpt below.

The Sacramento Bee reports on the ads:

An anti-gay rights group has purchased hourly radio spots to urge parents to keep their children home from school on Harvey Milk Day, which honors the gay rights pioneer.  Randy Thomasson, president of the SaveCalifornia.com, said the group bought more than 100 time slots for a radio ad in Los Angeles and Sacramento. It urges parents to “protect your children from Harvey Milk indoctrination,” by keeping them home from school on Wednesday. “This is harmful to children,” Thomasson said. “This is not academic, it’s brainwashing.”