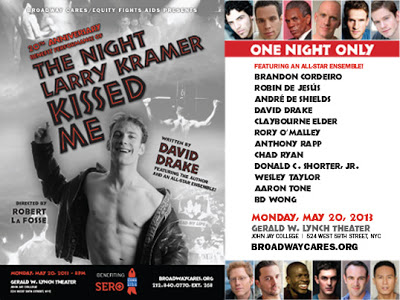 Courtesy of Broadway Cares, we’ve got a pair of tickets to the fundraising one-night-only revival of The Night Larry Kramer Kissed Me, which plays the Gerald W. Lynch theater on Monday, May 20th.

Enter to win by commenting on this post. If you cannot be in Manhattan on the night of the show, your winning entry is transferable to your favorite local theater buff.  Please remember to leave an email address in your comment. Entries close at midnight on Friday, Broadway-time.  Buy tickets here.