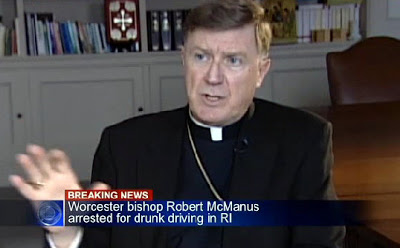 Bishop Robert McManus of the Diocese of Worchester, Massachusetts was arrested in Rhode Island last night and charged with drunk driving, leaving the scene of an accident, and refusing a Breathlyzer test.

McManus is to be arraigned Tuesday in district court in Wakefield, R.I. “I made a terrible error in judgment by driving after having consumed alcohol with dinner,” McManus said in the statement. “There is no excuse for the mistake I made, only a commitment to make amends and accept the consequences of my action.” “More importantly,” he said, “I ask forgiveness from the good people whom I serve, as well as my family and friends, in the Diocese of Worcester and the Diocese of Providence.” Pope John Paul II appointed McManus as the fifth bishop of the Worcester diocese in 2004.