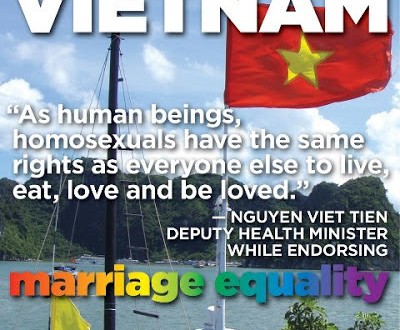 Vietnam should legalize same-sex marriage immediately, the deputy minister of health was quoted as saying today by local media. As human beings, homosexuals have the same rights as everyone else to live, eat, love and be loved,” Nguyen Viet Tien told a government meeting discussing the upcoming review of the Marriage and Family Law, newspaper Thanh Nien said. The National Assembly is scheduled to discuss allowing same-sex marriage when the law is reviewed in May.

Vietnam only had its first gay pride parade last year. Image via Memeograph.