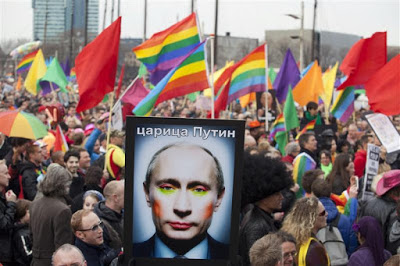 Three members of the women’s rights group Femen, which has protested against Russia’s detention of the feminist punk band Pussy Riot around Europe, disrupted his visit to a trade fair in the German city of Hanover. They stripped to the waist and shouted slogans calling Putin a “dictator” before being bundled away by security men. “Regarding this performance, I liked it,” grinned Putin at a joint news conference with German Chancellor Angela Merkel. “I did not catch what they were shouting, I did not even see if they were blondes, brunettes or chestnut-haired.

Later today at a meeting in Amsterdam over 1000 gay activists demonstrated against Putin’s presence.

Many houses and bridges in the historic canal district of Amsterdam were draped with banners and the rainbow flag of the gay pride movement, protesting about what human rights organizations say is institutional repression of gays in Russia. “Putin go homo,” read one, echoing the message “Putin go home” on the front page of Friday’s NRC Next daily newspaper. “I’m protesting against the anti-gay law in Russia because it’s unreal. You can’t tell people to go back into the closet,” said one protester.

Putin reacted to the gay demonstrators with an outrageous lie, telling the press, “In the Russian Federation – so that it is clear to everybody – there is no infringement on the rights of sexual minorities. These people, like everyone else, enjoy all the same rights and freedoms as everyone else.”

Previous Margaret Thatcher In 1987
Next REPORT: Gay Couples Will Not Be Included In Immigration Reform Bill