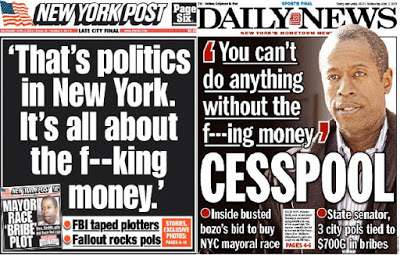 As a Democrat, Smith needed the permission of three of the city’s five county Republican leaders to appear on the GOP primary ballot. Halloran served as Smith’s go-between — the corrupt quarterback running his crooked coach’s political game plan, said U.S. Attorney Preet Bharara. The pair allegedly arranged to get envelopes of cash into the hands of GOP officials in the Bronx and Queens — though neither publicly endorsed Smith. In return, Smith agreed to use his office to obtain as much as $500,000 in state funding to benefit a real estate project supposedly being developed by the man who paid the bribes, the feds said. But that “developer” was an undercover FBI agent.

Those who know me, should know that I don’t kick people when they are down, I pray for them as I will be praying for Senator Malcolm Smith and his family and I extend my hand to help them get up as I did with Senators Pedro Espada, Hiram Monserrate, Carl Kruger and others. That is my calling. That is my responsibility and that is what God expects me to do. We all know that Senator Malcolm Smith is entitled and will have his day in court and the opportunity to prove his innocence if it so. In the meantime, let’s keep praying for him and his family and wait for the outcome.