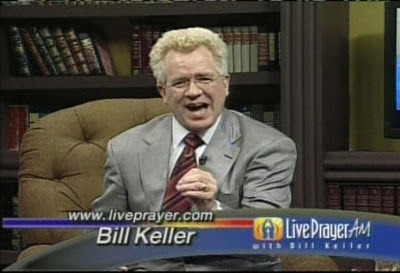 “Bill has no clue how he has demeaned Christians with his elitist ‘Bible-thumper’ remark, and has even doubled down in recent days. If he is so sure of himself it will be an easy $10,000 for the charity of his choice. Let him put his money where his mouth is or he is no different than the gutless wonders on MSNBC who will never take on those who stand for Biblical Truth on the issues of the day!”- Scamvangelist Bill Keller, offering to prove to Bill O’Reilly that the Bible says marriage is only for one man and one woman or else he’ll pay up.

RELATED: In August last year Keller said he would sue the SPLC for $100M for their usage of the term “hate group” to describe some Christian organizations. That hasn’t yet happened.  In March of last year Keller claimed that gay celebrities such as Ellen Degeneres and Anderson Cooper were responsible
for the suicide of gay Rutgers student Tyler Clementi. Also last year Keller claimed that over one million Americans had promised him they would write-in “Jesus Christ” on their November 2012 ballots. Election workers reported no such result. Keller, a
graduate of Dead Jerry Falwell’s Liberty University, is a convicted
felon who spent three years in prison for insider trading.

Previous Op-Ed Of The Day
Next Magic Johnson: I Love My Gay Son