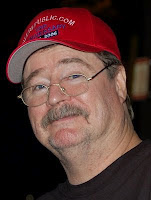 “When your godless Marxist president and his thuggish fascist cabinet
officers and his entire godless liberty-hating socialist democrat party
and sicko sycophant complicit leftist mainstream media and the
god-hating, constitution-twisting black-robed socialist liberal activist
judges continue conspiring to promote homosexualism and perversion as
not only normal but a healthy, wholesome, desirable activity and way of
life and then force it into the curriculum of even our youngest school
children, that is tyranny!