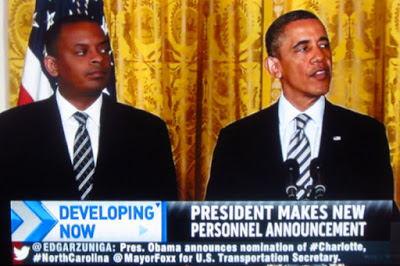 President Obama has taken some flak over the lack of diversity in his Cabinet, including a dig delivered from the Nerd Prom podium this weekend by Conan O’Brien. Today he nominated Charlotte Mayor Anthony Foxx to succeed Ray LaHood as Secretary of Transportation. Foxx gained national prominence last year as the official host of the Democratic National Convention. During today’s announcement LaHood urged Foxx to continue his campaign for high speed rail.  LaHood, incidentally, is a Republican.