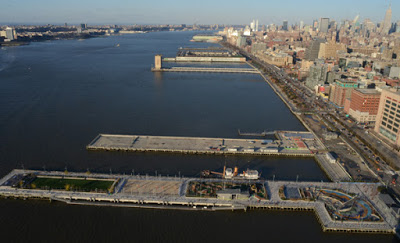 Last year NYC Pride was forced for the first time ever to move its legendary Pier Dance to an indoor location on a pier north of its traditional site, which had been scheduled for demolition.  The party was still a success but many attendees were disappointed that they couldn’t view the spectacular Hudson River fireworks that cap off the day. That won’t happen this year. Via press release:

NYC Pride announced today that its famous Dance on the Pier has found a new outdoor home: Hudson River Park’s Pier 26 in Tribeca. Dance on the Pier, now in its 27th year, will again serve as the official closing to NYC Pride week on Sunday, June 30. Hudson River Park’s Pier 26 will also play host to The Rally, the official Pride kick-off event, and Rapture on the River, the official women’s event. NYC Pride is very excited about the move back to an outdoor venue. While last year’s Dance and Rapture were a great success and Pier 57 a phenomenal host, producing the event indoors was a detour from tradition necessitated by the loss of Hudson River Park’s Pier 54. Dancing unabatedly in full view of this great city is something that many of the events’ attendees have come to love and expect. It is with great pride that we bring the Dance and Rapture back outside to their rightful place in the sun.

Pier 26 is second one from the bottom of the above photo and not only is it bigger than Pier 54, it is just about finished with a multi-million dollar face lift. Great news!