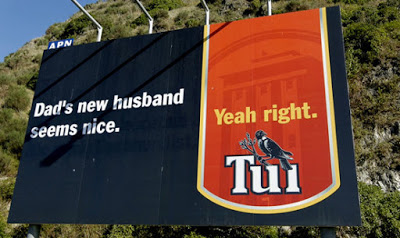 A New Zealand brewery is raising claims of homophobia with the above addition to their long-running “Yeah Right” campaign.  A spokesman for the company explains:

This joke would traditionally say ”wife”, as in the person isn’t happy with their Dad’s new partner.  However, now that marriage is open to homosexual couples, so too will be situations where Dad gets a new husband. The joke teller isn’t necessarily … not happy with Dad’s new husband because he (and Dad) are gay … The joke is more a reflection on recent events, and if anything, promotes gay marriage because we no longer have to say ”Dad’s new Civil Partner seems nice.”

The company’s slogan: “Distracting the boys from the task at hand since 1889.” (Via Boy Culture)