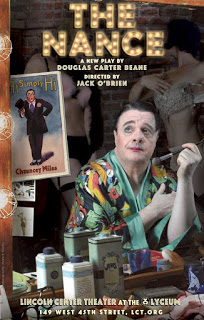 Nathan Lane Opens In The Nance

Last night I attended a press event for The Nance, the Broadway show starring Tony-winner Nathan Lane that opened this week.  From the four-star review in the New York Daily News:

Set in 1937 New York, the action follows Chauncey Miles (Lane), a performer with a niche role in a ragtag theater company. Chauncy plays the nance — a stock character who was a flamingly effeminate homosexual. “I like to play with the organ,” quips Chauncey. “I love, love, love when the organ swells? Oh, you brutes.” It was fine to swish and dish on stage, but it wasn’t okay to be gay offstage. A kiss between two men could get them pummeled by police and tossed in the clink. All the more so, thanks to Mayor LaGuardia’s morals crackdown in advance of the World’s Fair.   The action moves from burlesque theater where bawdy acts play out, complete with a tatty orchestra, to Chauncey’s Village apartment to a downtown automat where Chauncey trolls for assignations. John Lee Beatty’s evocative set spins its way to each location. Lane has won Tonys for musical star turns in “The Producers” and “A Funny Thing Happened on the Way to the Forum.” Under Jack O’Brien’s assured direction, he’s funny, sad and touching as the conflicted Chauncey.

In the early part of the 1930s there was something called the “Pansy Craze,” and every nightclub, burlesque, vaudeville, and Broadway house had these gay characters. There was an explosion of this particular type of comedy and it was hugely popular. And then by the late 1930s there was a backlash. There was a new mayor of New York and a new administration: Fiorello LaGuardia was probably the best mayor the city ever had, but he was very Catholic and very uptight. He couldn’t stand burlesque. He thought it was cheap and vulgar and so he hired a man named Paul Moss as the commissioner of licenses. You couldn’t perform in New York without having a license first, and Moss basically took it upon himself to shut down burlesque, not only for women stripping, but also for “deviance on stage.” That meant any portrayal of a gay person in a play. You couldn’t make a reference to a gay character even in a Broadway show.

You’ll find quite a few references to modern day politics in The Nance, particularly in Lane’s gay Republican title character and in the closeted Ken Mehlman-like license commissioner determined to keep gays off the stage. And if you like the rimshot groaners that were the stock of burlesque – those are nonstop. I’ll give you just one. Dressed in a drag as an aging hooker, Lane says, “He said to me, ‘Hortense, you are nothing but a two-bit hooker.’ So I hit him with my bag of quarters.” Bah-dum-dum.  Highly recommended.