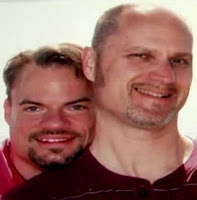 A gay man in Missouri has been arrested after refusing to leave his partner’s hospital beside when the ill man’s family demanded that he be ejected from the premises. Via Raw Story:

Roger Gorley [on the right in this photo] told WDAF that even though he has power of attorney to handle his partner’s affairs, a family member asked him to leave when he visited Research Medical Center in Kansas City on Tuesday. Gorley said he refused to leave his partner Allen’s bedside, and that’s when security put him in handcuffs and escorted him from the building. “I was not recognized as being the husband, I wasn’t recognized as being the partner,” Gorley explained. He said the nurse refused to confirm that the couple shared power of attorney and made medical decision for each other. “She didn’t even bother to look it up, to check in to it,” the Lee’s Summit resident recalled.

The arrested man in now under a restraining order and may not enter the hospital grounds at all. A hospital spokesman has issued a statement.

“We believe involving the family is an important part of the patient care process. And, the patient`s needs are always our first priority. When anyone becomes disruptive to providing the necessary patient care, we involve our security team to help calm the situation and to protect our patients and staff. If the situation continues to escalate, we have no choice but to request police assistance.”

The arrested man says he and his partner were joined in a civil union five years ago. Civil unions, of course, are not legally recognized by the state of Missouri. (Tipped by JMG reader Str8 Grandmother)

RELATED: In 2010 President Obama mandated that any hospital that receives federal funding such as Medicare or Medicaid must allow visitation privileges for same-sex partners.