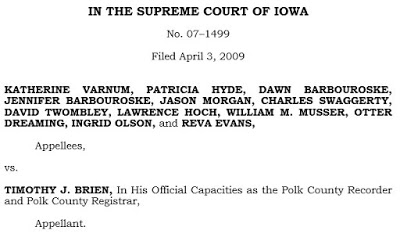 One Iowa cheers via press release:

Today, April 3, marks the four-year anniversary of the historic marriage decision in Iowa. On April 3, 2009, the Iowa State Supreme Court unanimously ruled that excluding gay and lesbian couples from marriage violated the equal protection clause of the state Constitution. Since then, roughly 6,000 couples have wed in Iowa. The case was Varnum v. Brien. “Iowa is a better place because of marriage equality. For four years now, gay and lesbian couples have been able to stand up in front of friends and family and make that lifelong commitment to one another and to have that commitment recognized by their state. To hear those words ‘by the power vested in me by the state of Iowa’ is powerful,” said Donna Red Wing, One Iowa Executive Director.

That case was first filed in 2005 by Lambda Legal.

Previous The Science Of Cats
Next Don Imus: Jesus Might Have Been Gay