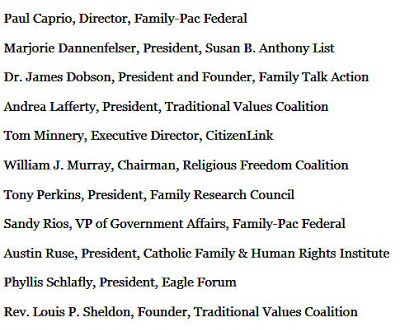 The above hate group leaders and crackpots have signed a letter to RNC chairman Reince Preibus in which they threaten to end their support for the GOP if the party platform is amended to remove the opposition to same-sex marriage.  Here’s an excerpt:

Many homosexuals are active in the GOP because they agree with Republicans on economic issues. The fact that the Party is strongly committed to traditional marriage has not prevented their involvement through GOProud or Log Cabin Republicans. We deeply resent the insinuation that we have treated homosexuals unkindly personally.

And we would like to point out that in the four blue states where voters narrowly voted for same sex marriage in 2012, Mitt Romney, who refused to discuss the issue, lost by an average of five points more than the state initiatives to preserve marriage.

We respectfully warn GOP Leadership that an abandonment of its principles will necessarily result in the abandonment of our constituents to their support. We could not change that even if we wished to.

As a gesture of good faith and an affirmation of its positions, we strongly recommend that the RNC meeting in Los Angeles on April 9th pass a resolution reaffirming its support of the 2012 National GOP Platform adopted in Tampa.

The RNC meeting continues until the end of the week. Think Progress has the text of a proposed meeting resolution that reaffirms the continued opposition to same-sex marriage. Hit that link and you’ll note that the resolution copiously cites the widely-debunked Regnerus study.

Previous Santorum Is Back On With MI School
Next Another Lawsuit For WA Florist?