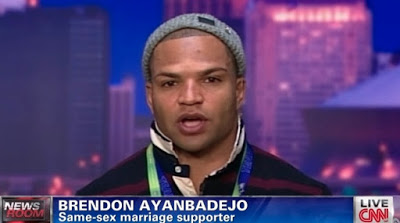 “Just a heads up I did an interview today and no way said I was cut because my views. I said my talk was louder than my production and at 36 when you are not producing it is a fair move. You can find cheaper guys to do what I do. Ravens are the best organization in the NFL period!” – Baltimore Ravens linebacker Brendon Ayanbadego, telling his Facebook followers that he was not released by the team due to his advocacy for same-sex marriage. (Tipped by JMG reader Mike)

Ayanbagego spent much of last night on Twitter reassuring fans and denouncing homophobes.