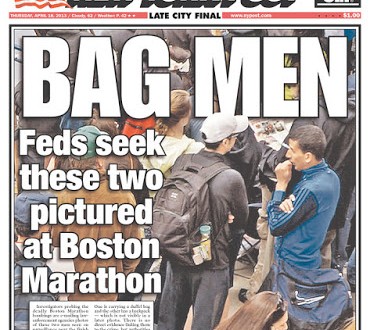 Days after the New York Post wrongly claimed that 12 people had been killed in Boston’s bombing, their front page today wrongly claims that the two men pictured are being sought by the FBI.   Deadspin rips the Post to shreds:

On Tuesday, CNN (among others) reported that a suspect had been arrested, before walking that all the way back. Today, the Post wrests back the “what the fuck are you doing?” crown by putting two “potential suspects” on the cover of the newspaper. They are most assuredly innocent. The pair show up in multiple photos of the finish line. They carry large bags. They are dark-skinned. This was enough for internet sleuths to peg them as suspicious. And that was apparently enough for the Post to run with its front-page story today, claiming investigators are circulating photos of the two.

But maybe there was a reason for them to be at the marathon, wearing track jackets and carrying bags: they’re runners. The kid in the blue jacket is a middle-distance runner at Revere High School. Last week he ran the two-mile in 11:20. Yesterday he caught wind that his name and social media profiles were being circulated online, and he did what any teenager would do: He panicked. He made his Facebook timeline private, and in one message now no longer visible, he announced he was going to clear his name.

RELATED: Yesterday’s New York Post front page featured a image that had been photoshopped to make it appear that the victim did not have a grievous leg injury. Other outlets that ran the same photo blurred the injury or placed a black bar over it.